A Cowboy State of Mind by Jennie Marts Exclusive Excerpt

Today we have a sexy cowboy here on Night Owl Romance. So lets have an excerpt and a book giveaway.

About A Cowboy State of Mind:

Zane Taylor has a gift for communicating with animals, particularly horses, but he’s at a loss when it comes to women. He’s a scarred and battered loner who has sworn off love—except he can’t seem to stay away from Bryn Callahan.

Bryn Callahan has a heart for strays, as evidenced by the assembly of abandoned animals that have found their way to her doorstep. But she is through trying to save damaged men. She vows to date only nice guys, which is a category that does not include Zane Taylor. Too bad he’s the one who sets her pulse racing every time she’s around him.

A chance encounter with a horse headed for slaughter brings Zane and Bryn together. Although starting a horse rescue ranch wasn’t in the plan, now Zane and Bryn have a chance to save not just the animals, but maybe each other…

This is a scene that happens after Bryn and Zane come back to the farm to find an abandoned mini-horse named Shamus tied up on the front porch. The horse was in terrible shape. They gave him some food, a bath, and Zane cleaned and clipped his unruly hooves then they took him out to the corral to join the other horses.

“Gah. Look how cute he is.” Bryn clapped a hand to her chest as they watched the mini horse walk tentatively into the corral, as if testing out a new pair of shoes. “His feet must feel a ton better.”

“They aren’t a hundred percent. It’s gonna take a few weeks and some more care, but yeah, just cleaning them out and trimming them back has got to feel like a vast improvement.”

She laughed as the little horse sprung up and down and pranced toward them. “He looks like he’s hopping. He’s gone from looking like Eeyore to bouncing like Tigger.”

Caught up in her laughter, Zane leaned down and called the horse, then raced around the corral, encouraging Shamus to chase after him. The little pony trotted and pranced after him.

Bryn joined in the fun, running after Zane and cooing to the horse, her laughter filling the corral and Zane’s heart.

“We did it,” Bryn cried, launching herself into Zane’s arms. “We really did it. We saved this little horse. And now we’ve saved three horses. I’m so happy I think my heart is going to burst.” She wrapped her arms around his neck as she hugged him.

He hugged her back, his hands automatically going around her back and pulling her to him.

Emotions swirled through him—a pang in his chest that might have been his heart exploding mixed with the heat of want and need.

She pulled her head back and looked up at him, her eyes bright with excitement. “Thank you,” she whispered. “I couldn’t have done this, any of this, without you.”

He shook his head, his neck and ears going hot. “I didn’t do anything,” he muttered.

He held her gaze, the butterflies in his gut crashing into his stomach walls in kamikaze dive bombs. Which was how he felt—like this thing with Bryn was a kamikaze mission, and the only thing to come from it would be hurt and pain and loss.

Still. He wanted this. Wanted her. His gaze dropped to her lips. They shimmered with some kind of gloss, looking soft and plump as they parted—as if in anticipation.

But her lips. They parted. She wants me to kiss her.

Doesn’t matter. You’re not the guy for her. She’s good and sweet. You’re only going to hurt her.

Want and need tightened his chest, every nerve singing with desire as he fought an internal battle with his subconscious. Should he? Shouldn’t he?

He knew his subconscious was right. He wasn’t the guy for her. He wasn’t even sticking around.

Why start something he couldn’t finish?

Because it would feel so damn good.

Except he could have her. All he had to do was lean down and press his lips to hers.

He’d kissed her once, outside the diner, but that was a peck, a whisper of the way he wanted to kiss her now. He wasn’t interested in a peck. He wanted to crush her mouth with his, to take his time and kiss her good and thorough.

But that would only open the door—a door he couldn’t make himself walk through and one he wouldn’t be able to shut. Once he’d really kissed her, tasted her, he would only want more.

Which was why he should walk away.

That’s what I’ve been trying to tell you.

His gaze was still on her mouth. Walk away.

He raised one hand to touch her cheek, resting his fingers lightly on her face as he drew the side of his thumb along the edge of her bottom lip. She hitched in the softest breath and pulled the corner of her lip—the spot he’d just touched—under her top teeth.

Ah to hell with it.

He leaned in, brushed her lips with his, the softest graze, but it was enough—enough to stir the longing he’d thought he’d long buried, enough to start his heart thrashing into the walls of his chest, enough to know he wanted more.

He wanted it all.

This giveaway is now over. The lucky print book winner is: Joy Hack

About the Author: Jennie Marts is the USA Today bestselling author of award-winning books filled with love, laughter, and always a happily ever after. She is living her own happily ever after with her husband, two dogs, and a parakeet that loves to tweet to the oldies, in the mountains of Colorado. Author Website: https://jenniemarts.com 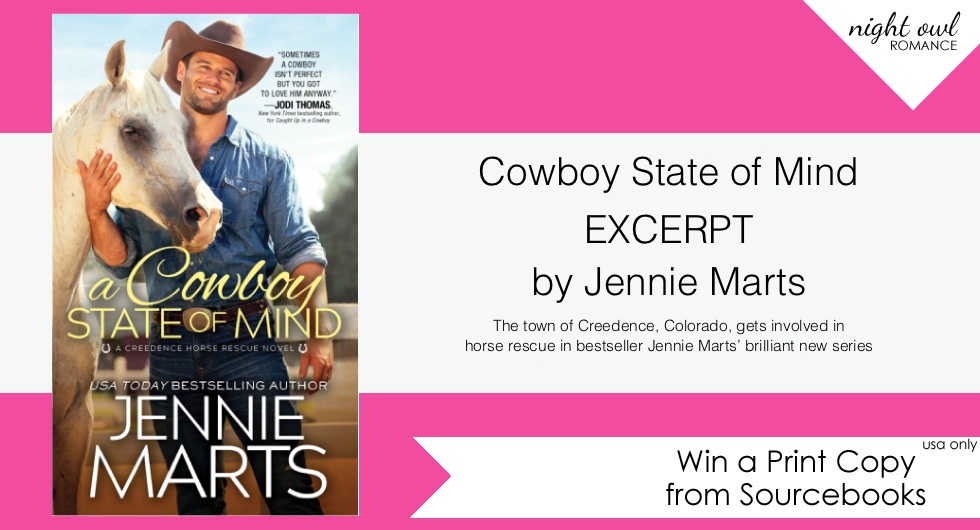