Hi, everyone. I’m not in Scotland right now, but in Chicago, signing books at the International Quilt Festival, where about 60,000 people have gathered. Quite a few will stop by to see me, Marie Bostwick, and Arlene Sachitano to pick up a couple of books. I feel very fortunate to have this opportunity to meet with my readers and make new friends.

I’ve always loved Scoltand—from the tartans to the bagpipes. When I was a child, though I wasn’t Catholic, I dreamed of going to Catholic school because the girls wore plaid uniforms to school (at least my grandmother’s neighbor’s daughter did!) I guess loving Scotland is in my blood, as my ancestry is part Scot. Some days while I’m writing, I swear I can hear bagpipes, but it’s probably just wishful thinking.

In the Kilts and Quilts series, I write about the fishing village of Gandiegow, and now, the wool community of Whussendale.

Fun fact: I came up with Whussendale when I was perusing a Scottish dictionary and stumbled across the word Whussenday.

I loved the sound of Whussenday, and voilà, Whussendale was born. And for those of you who haven’t read the Kilts and Quilts novels, Gandiegow means a squall of wind and rain.

I love Scotland. I feel very much at home there. My cousin once described Scotland as a country made up of small towns. And maybe that’s why I love it so. You see, I grew up in a small community of 600 people. My town and the surrounding towns were too small for a school district so we all bussed out to a school built in the country, midpoint between all the small towns. Seriously, corn fields surrounded the school! But I digress…

When I visit Scotland, I usually stay in Crail for a week or two. Crail, declared a Royal Burgh by Robert the Bruce, is about 20 minutes southeast of St. Andrews and is home to 1,700 residents. Crail is an historic fishing village, where photographers flock to take pictures of its nearly enclosed harbor. I love nothing more than to sit down by the water and write. And gaze at the boats coming into the harbor. And to dream of my little town of Gandiegow. (https://en.wikipedia.org/wiki/Crail)

But Gandiegow isn’t Crail. Gandiegow is comprised of many of my favorite villages. I once visited Crovie (pronounced “criv-ee”), which is on the northeast coast of Scotland between Pennan (Parts of Local Hero (https://amzn.to/2J58th4) was shot there) and Banff. The landscape of Crovie resembles Gandiegow, but not the village itself, as most of the cottages in Crovie have been converted into holiday lets.

Crovie on a calm day…

A few years ago, I met a Scottish quilter at QuiltWeek in Paducah and when I visited Scotland the next year, I met up with her and her husband. She took me to Footdee (pronounced “fit-ee”, https://en.wikipedia.org/wiki/Footdee) Okay, so we had to hop over a cement wall to get there from the beach. Yes, I was glad there were no video cameras running. Two fifty something women going over the wall would’ve made America’s Funniest Videos for sure!

Footdee, an ancient fishing village, was magical. A time-capsule almost. There was an artist, though she was closing down for the night, invited us in to see her paintings. The fisherman’s cottage which housed her gallery was once her grandfather’s cottage. I bought several of her greeting cards and have framed them for my Scotland wall in my office.

So here’s the thing about travel and the most wonderful thing about books. You don’t have to leave your home, deal with getting patted down by security at the airport, or have the expense of travel. Books make it easy to travel anyway, but I choose Scotland. For me, the added bonus, is that even if I’m sitting at my computer at home, my heart is always there in the Highlands…either in Gandiegow or Whussendale. Or other places my characters may travel. It’s the magic of books.

Question: Where in the world would you love to travel in in books? Please leave your recommendation below so the rest of us can read about other countries and other cultures.

Blame It on Scotland - Kilts and Quilts Book 7

From the author of It Happened in Scotland—a charming new romance set in the magical Scottish Highlands.

The quilters of Gandiegow expand more than their quilting enterprise into the village of Whussendale. They bring along a heavy dose of good-hearted meddling, too. What’s the outcome? Love will never be the same…

When Tuck MacBride, Gandiegow’s favorite scapegoat, is blamed for a fisherman’s tragic accident, Tuck takes on extra work to secretly funnel his earnings to the maimed fisherman’s family. Haunted by the mistaken turn of events, Tuck is working night and day. Even so he can’t stop thinking about the new lass who has just arrived in town.

Ryn Breckenridge has no one left in the world. To fulfill her mother’s last request, Ryn travels to Scotland to return a quilt to her long lost cousin. Hoping to rebuild family ties, Ryn volunteers to help her cousin at the upcoming quilt retreat. But there is more than quilting on Ryn’s mind. The irresistible Tuck MacBride is proving to be a dangerous distraction.

Ryn’s past is riddled with bad boys like Tuck, who have left her alone and broken. She vows to stay away, but can’t help taking a closer look when she realizes there is more to Tuck than meets the eye. Both of their pasts contain shattered promises, but Scotland is known to bring reluctant hearts together. Will the two of them be willing to cross the deep chasm between them and find love? If they do, they will only have Scotland to blame…

This giveaway is now over. The winner has been posted in the comments.

Award-winning author Patience Griffin has been writing and sewing her whole life but didn’t discover her love of quilting until her late thirties. She decided the best way to acquire her first quilt was to make one for herself. At nearly the same time, she started commuting three and half hours a day for her dream engineering job. To pass the time on the long drive, she got hooked on audiobooks—especially books with love stories. Within a couple of years, she was writing stories of her own. It was no surprise to her family and friends when she combined her love of quilting, her small town roots, and her obsession with Scottish romances into novels. She has gained some recognition with her September 11th Story Quilt which has toured the country as the property of the Pentagon. Her first book, To Scotland with Love, received a Publishers Weekly *starred reviewed, won the New England Readers’ Choice award and Golden Quill for best first book and was also a double RITA® finalist. Patience’s Kilts and Quilts series takes place in small town Scotland and set around a group of quilters. She loves to write about home, heart, and community. 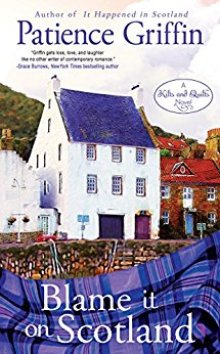