The Top Five Qualities of a Lovable Earl

I think a lovable earl would have the same top five qualities as a lovable person. But what makes a person lovable? That’s a question that might have a wide range of answers. For me, the basics would have to include:

Of course, it doesn’t hurt if the earl in question has piles of money, a luxurious estate, a handsome face, and beautiful manners to go with his social position. But if he’s going to be truly lovable, for me, he needs these deeper attractions too.

Is there anything you would add to the characteristics of an ideal earl?

An Earl mired in melancholy is no match for a determined woman...

Widower Benjamin Romilly, Earl of Furness, has given up hope of finding happiness. His wife died in childbirth five years ago, leaving him with a broken heart and a child who only reminds him of his loss.

Miss Jean Saunders is a cousin by marriage. She doted on Benjamin's late Countess, and can't bear it when she hears rumors that the Earl is too bereaved to care for his young son. She arrives on the scene to evaluate his fitness as a father, and if necessary, to take his son away.

Jean's sudden eruption into the Earl's household simultaneously infuriates and invigorates him. She may be the only person who can breathe life into his neglected home and his aching heart...

The lucky winner has been posted in the comments.

Jane Ashford has written historical and contemporary romances. Her books have been published in Sweden, Italy, England, Denmark, France, Russia, Latvia, Slovenia, the Czech Republic, Slovakia, and Spain, as well as the U.S. She has been nominated for a Career Achievement Award by RT Book Reviews. 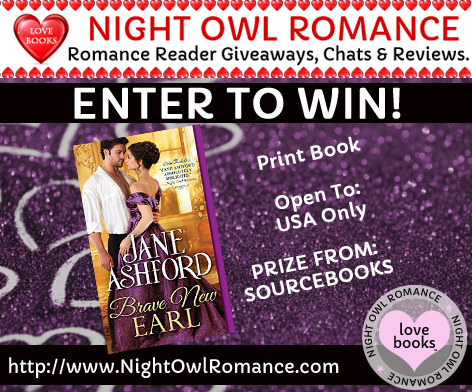