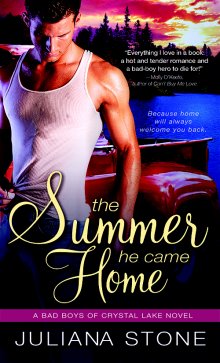 Checking in with Juliana Stone

Update Your NOR Contest Passport ADDRESS - REQUIRED FOR ENTRY!

Hi Juliana. Thanks for joining us and answering some questions about your latest, The Summer He Came Home.

Describe Cain Black for us.

I wanted to write Cain Black as the guy that every woman would want.  He’s got that bad boy edge—a rocker who’s seen and done a lot.  Physically he’s gorgeous, tall, athletic—you know the one—the guy who fills out his jeans well but looks even better without them on.  But he’s also got many layers. He’s fiercely protective of those who he loves—his mother, his friends and ultimately the woman who claims his heart.

He’s the kind of guy who will make you breakfast after ravishing every inch of your body :)

Crystal Lake is a town that in my mind was fictional.  I based it on the small town where I live, but it’s located in Michigan.  I had no idea when I wrote the book that there is actually a Crystal Lake in Michigan!  A reader who’d read an ARC told me that, but she also told me I’d done a great job writing about the location etc.

I’ve been to Michigan many times as I live in Canada but not far from the state. I tend to write about things I know and name places after people/things I know.  Crystal Lake was named after one of my closest girlfriends—Crystal!

Truthfully, the name and location (to me) isn’t  uber important. It’s what the town represents.  Family. Roots.  Love.  This town is a lot like the one I live in. It’s the kind of place where you can’t go to the grocery store without running into someone you know.  It’s where I live and it’s what I love to write about!

Tell us about Maggie and what she thinks about Cain.

Maggie O’Rourke is a woman running from something dark.  She’s a young, single mother who loves her son more than anything. She’ll do whatever it takes to protect him, even if that means giving up something like love.

She’s a strong woman.  She’s made a new life for herself and her young son.  She’s sacrificed a lot, so when Cain Black walks into her life and makes her feel things she doesn’t think she has the time to feel...he pretty much turns her nice and neat life upside down.

She knows that he’s a good man, but she’s concerned about letting him get too close to her and Michael.  He’s a musician.  He’ll be leaving Crystal Lake eventually and she’s pretty sure he won’t look back.  She’s especially sure he’ll forget about her and her son.  So, even though their attraction is hot and explosive, she’s hesitant to start a relationship with the most notorious of the ‘bad boys’.

Of course Cain’s charm and attraction wear her down and then the question becomes, how much will she give him?  A good time?  Or her whole heart?

The Summer He Came Home - Bad Boys of Crystal Lake

Sometimes the best place to find love is right back where you started...

Falling asleep in a different bed every night has made it easy for Cain Black to forget his past. It's been ten years since he packed his guitar and left Crystal Lake to chase his dreams. Now tragedy has forced him home again. And though Cain relishes the freedom of the road, one stolen moment with Maggie O'Rourke makes him wonder if he's missing out on something bigger than fame.

For Maggie--single mother and newly settled in Crystal Lake--love is a luxury she just can't afford. Sure, she appreciates the tall, dark and handsome looks of prodigal son Cain Black. But how long can she expect the notorious hellion to stay?

The last thing either of them wants is something complicated. But sometimes love has its own plans

Juliana Stone's love of the written word and 80s rock, have inspired her in more ways than one. She writes both paranormal romance as well as contemporary romance and will debut her young adult contemporary in 2014. She spends her days navigating a busy life that includes, a husband, kids, a dog and a cat and lives somewhere in the wilds of Canada.