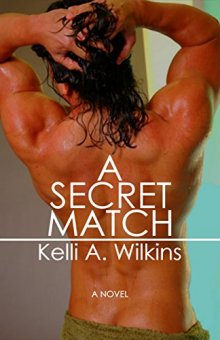 Here’s a look at my gay romance, A Secret Match. It’s a sizzling contemporary romance set in the world of professional wrestling.

Before we get started, let me answer the question lots of folks may be asking: “Why do you write gay romances? You’re not a man or gay.” I generally respond with: “Why shouldn’t I? I wrote a vampire romance, and I’ve never been a vampire.”

But seriously, I’m a writer. And as a writer, I write whatever story comes to me, whether it’s a contemporary, historical, paranormal, or gay romance. My romances are about people who meet, fall in love, and overcome obstacles to be with each other. This basic philosophy applies whether the characters are same-sex, different sex, or space alien and earth girl. Love is love and romance is romance. I’m not married to one specific genre or heat level. I go where the story and the characters take me.

So, how did A Secret Match come about? I’ve been a wrestling fan my whole life and A Secret Match is a follow-up (of sorts) to my other wrestling romance, A Deceptive Match. That book is about a straight couple (Vin and Danni) and Everett (the main character from A Secret Match) is a secondary character (and Vin’s best friend).

Here’s the book summary and an exclusive (mild) excerpt:

Everett Kinkade is a world-famous professional wrestler and the sexy heartthrob of millions of adoring female fans. But Ev has a secret he doesn’t dare share with anyone. He’s gay.

After years of being Ev’s secret lover, Josh is tired of hiding in the shadows and wants Ev to openly acknowledge their relationship. Coming out is the last thing Ev wants and fears it will ruin his career.

One night in a moment of truth, Everett outs himself on live TV. There’s no going back, and his announcement sparks a firestorm of problems—both personally and professionally. He’s forced to come to grips with who he really is while facing down a manipulative boss and a tag-team out to destroy him.

Torn between living a lie and losing the man he loves, Ev has risked everything… can he find a balance between his career and his heart?

His thoughts wandered back to the day he and Josh met. He had been running on a treadmill when Josh came along and starting jogging alongside him. After he finished his run, he’d gone to the free weights and Josh took one of the nearby machines.

He had casually watched him out of the corner of his eye. Josh was cute, a little over six feet tall, medium build, with a thin beard and brown hair. After a few minutes, he noticed Josh was checking him out, too.

Josh left the machine and came over. “If you don’t mind my asking, are you a trainer?”

“Because you’re curling a hundred pounds in one arm,” Josh said. “I’ve never seen anyone do that before.”

“I bench four-ten. Wanna spot me?”

“Are you kidding? How can you do that? It’s like lifting a refrigerator.” Josh flashed him a slight smile. “I’ve been away from the gym for a while and I was thinking about hiring a trainer—”

“Don’t waste your money. Most of them don’t know squat. They’ll burn you out too fast. Start with weights, but go slow and don’t overdo it,” he advised. “Simple reps. It takes time to build up your muscles, and you don’t want to rip anything out.”

Josh was grateful for the advice, and Everett spent the next two hours giving him pointers. As he was packing up, Josh asked if he’d be there tomorrow. He agreed to meet him again and give him more training tips. After a week of meeting up to work out, it had finally dawned on him that Josh was flirting with him. And he liked it.

The next night, he had summoned his courage and invited Josh to grab a bite to eat after their workout. To his surprise, Josh agreed.

“I appreciate you helping me work out,” Josh said as they drove toward a diner. “You know a lot. But I want to tell you…I’m not a gym slut.”

His heart skipped a beat. “Excuse me?”

“You know, guys who pick up other guys at the gym for a—”

“Whoa, whoa. I have no idea what you’re talking about.” An icy chill ran down his spine. “What do you mean, picking up guys?”

“Your type?” Ev pulled into a deserted bank parking lot and cut the engine. “Why would you think that?”

Josh shrugged. “Well, we’ve been flirting all week. And tonight when that brunette kept sticking her skinny ass in your face, you never paid her any attention.”

“See? A straight guy would have noticed,” Josh joked. “I’m sorry for being blunt, but I wanted to be clear and get it out in the open. If I misunderstood and you’re not… interested… Shit.” Josh looked at him. “I hope you’re not pissed off, because you’re strong enough to mangle me with one hand.”

Ev squirmed in his seat. Part of him wanted to confess the truth, but another part was too afraid. “It’s okay, I’m not mad. I’m…”

He stared out the driver’s side window. Say it, Ev, his mind screamed. “Yeah,” he answered quietly.

He glanced at Josh and nodded ever so slightly. After a minute, he decided to risk telling him the truth. What the hell, this guy didn’t know him, if he blabbed, it wouldn’t matter. “I knew you were paying me attention and asking questions, but I wasn’t sure if you were interested in working out… or what.”

Order your copy of A SECRET MATCH here:

I hope you’ll check out the book. It was a lot of fun to write, and Ev is really an amazing (and amusing) character.

I enjoy hearing from readers so drop me a line about the book, or follow me on social media.

Kelli A. Wilkins is an award-winning author who has published more than 100 short stories, 19 romance novels, and 5 non-fiction books. Her romances span many genres and heat levels.

Her paranormal-comedy, Beauty & the Bigfoot, was published in September 2017.

Loving a Wild Stranger was published in January 2017. This historical/pioneer romance is set in the wilds of the Michigan Territory and blends tender romance with adventure.

Kelli's third Medallion Press romance, Lies, Love & Redemption was released in September 2016. This spicy historical western is set on the Nebraska prairie in 1877.

Her writing book, You Can Write—Really! A Beginner’s Guide to Writing Fiction is a fun and informative guide filled with writing exercises and helpful tips all authors can use.

Visit her website, www.KelliWilkins.com to learn more about all of her writings, read book excerpts, reviews, and more. Readers can sign up for her newsletter here: http://eepurl.com/HVQqb.