The true measure of a man is not in the mistakes he makes…but in how he handles those mistakes.

After leaving the Army, Zander King wants nothing more to do with being a hero. His life plan is to keep his nose clean, work hard to make his bar successful and avoid damsels in distress. Old habits died hard, though, so when a beautiful stranger walks into the bar to drink alone, his protective instincts kicked into high gear. It was a good thing too, because his was not the only eye she caught in his rough-side-of-town establishment.

When a man won't take no for an answer from her, Zander kicks him out, but he sends the woman, who doesn't belong there, packing too. Too late, he realizes his mistake in releasing the petite, vulnerable woman out into the neighborhood alone, when he finds her near death outside the bar at closing time.

Racked with guilt, Zander's conscience won't let him abandon her until he knows she'll be okay. At the hospital days later, his sleeping beauty, Jane Doe, finally wakes up, but she doesn't remember who she is or how she got there.

Zander vows to help her put the pieces of her memory back together, but would regaining her memory only put her in more danger?

Themes, language, and adult situations are similar to an R-rated movie. For 18+ years.

Once they had gotten home from Miss Ethel’s the previous evening, and Zander had carted Rosalie’s suitcases to his apartment, she was thrilled to pour through each one, discovering her clothes, toiletries, books, files, and her laptop. As though reunited with long lost friends, she sat on the bed in the guest room, going through her belongings. Firing up the laptop, she remembered her password and was soon checking her emails.

Walking into her room, Zander had looked at her crestfallen face. Before he had a chance to ask, she spoke.

“It was Jefferson High School that had hired me and I’ve been getting emails wondering where I was.” Sighing, she said, “The last one states that due to my being a no-show, my contract is null and void.”

“Nothing…it’s just that now I’m unemployed. I guess I’ll call them tomorrow to see if there is something that I can salvage from this mess.” She shifted on the bed to face him, her mouth pinched into a line. “I feel like I lost so many things and that…that…monster who took them from me is still out there.”

Rosalie voiced his same concerns and Zander slid his hands down her arms to clench her fingers.

“He won’t get near you again. And we’ll figure out something.”

The next day, Zander stood in the kitchen, the refrigerator door open, listening to Rosalie’s phone conversation. They had gone that morning to get a new cell phone for her and he delighted in her joy over her new purchase. She immediately put in his number, Miss Ethel’s and his brothers’, as well as Sidney’s andJeff’s.

He went to the grocery store after that to give her some privacy and check on Grimm’s. Now, as he listened to her voice, it appeared things with the school were not going well.

“Yes, yes…I understand. All right. Well, can you tell me what the next step is?”

He watched her roll her eyes before her lips turned down.

“Okay, thank you very much. I’ll be sure to go online and do that this afternoon.” She disconnected and looked over at him. “I guess you can tell that I don’t have the job. I told them I could provide them with the police and hospital records so they would know I was telling the truth. They were sympathetic, but they had to have a teacher, so they hired someone else. Given my circumstances and excellent application, they did say that I could do substitute teaching this year and reapply for full-time teaching next year.”

“Babe, I’m so sorry, and I’m pissed because it feels like I keep having to say that—”

“Zander, none of this is your fault,” she said, jumping up from the sofa, rushing over to him. “You’ve done nothing but rescue me, take care of me…my God, you’ve been my hero.”

As an Award Winning, Amazon International Bestselling and All-Star author, Kobo, and Barnes & Noble Best Selling Author, I have always been an avid reader. In 2013 I started a blog to showcase wonderful writers and finally gave in to the characters in my head pleading for their story to be told. Thus, Emma's Home was created. 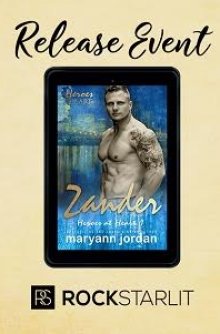