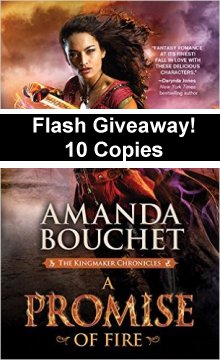 Flash Giveaway: 10 Copies of Promise of Fire by Amanda Bouchet

Get entered to win 1 of 10 copies of "Promise of Fire". This is one of our TOP PICKS for Aug 2016 as well as Tammie's favorite Science Fiction Romance to be released in years.

The publisher has offered these copies and will be shipping the books to readers.

A Promise of Fire - Kingmaker Chronicles, #1

KINGDOMS WILL RISE AND FALL FOR HER...

"Cat" Catalia Fisa lives disguised as a soothsayer in a traveling circus. She is perfectly content avoiding the danger and destiny the Gods-and her homicidal mother-have saddled her with. That is, until Griffin, an ambitious warlord from the magic-deprived south, fixes her with his steely gaze and upsets her illusion of safety forever.

BUT NOT IF SHE CAN HELP IT

Griffin knows Cat is the Kingmaker, the woman who divines the truth through lies. He wants her as a powerful weapon for his newly conquered realm-until he realizes he wants her for much more than her magic. Cat fights him at every turn, but Griffin's fairness, loyalty, and smoldering advances make him increasingly hard to resist and leave her wondering if life really does have to be short, and lived alone.