I absolutely love vacations. Who doesn’t?!

Back in 2015, my husband and I drove to St. Augustine, Florida for our 5th wedding anniversary. I’ve been there a few times before when I was a child, and I’ve talked about the little coastal tourist town so often Greg wanted to see it for himself.

We toured several historical hotspots, including the Castillo de San Marcos (the oldest existing fort in the US), another fort known as Fort Matanzas, the lighthouse and maritime museum, Ripley’s Believe it Or Not, Potter’s Wax Museum, The Mission Nombre de Dios (a gorgeous historical Catholic church with a walking park), and so many other places. We also toured Old Town, the historical downtown area, and learned a lot of sordid town history, hiked in Washington Oaks Garden State Park where a spider bit me on the head (the wound burned for days after), and of course we swam in the ocean.

The best part of the vacation, at least for me, was swimming and playing in the ocean during a storm. Yes, that was pretty foolish, but Greg and I didn’t travel too far into the water. As you can see in the picture, the sky is dark with storm clouds and the waves were really choppy. The wind blasted the beach, and we finally hightailed our butts to the car once the rain started.

One of the worst parts was the bad parking in Old Town. It’s all paid parking with limited spots and hours. Granted, I understand space is limited and a historical building shouldn’t be razed to provide more parking, but for someone on a budget, it was a little difficult finding good accommodations for the car. Luckily, Greg and I got a hotel nearby and walked almost everywhere in Old Town.

The week prior to our arrival, a tropical storm had hit the area, so there was still residual rain and clouds throughout most of our trip. We were often soaked after walking around, and the hot shower in the hotel room felt soooooo good.

The best restaurant we found was Burger Buckets, a colorful eatery in Old Town. The nachos and hamburgers were huge and affordable for the size. I can honestly say I haven’t had a plate of nachos that good since the trip.

All in all, we enjoyed our vacation to St. Augustine, and I definitely recommend going if you love anything to do with history, pirates, great food, and the beach.

Once you’re in a prison gang, you’re in it for life.

That’s what Mason Harding thought until the boss accepted his resignation. After the State releases him on parole, a sexy divorcée behind the wheel of a car almost ends his life quicker than a shank. His chance encounter with Mia Eddison results in a night of passion, but her brother—his parole officer—catches them together and doesn’t approve.

Mia falls hard for the cocky ex-con, but not because of his chiseled body. She vows to break through his walls and discover his secrets, but never expects those secrets to threaten her life.

When members of an organized crime ring kidnap Mia to force Mason’s return to the gang, he goes up against an old friend to save the woman he loves. Will his sacrifice be enough or will everything fall apart in a blaze of gunfire?

Writing is the fruit to happiness.

Amber Daulton lives her life by that one belief even though she normally isn’t so Zen.

Author of Forever Winter, A Hero’s Heart and Lightning over Bennett Ranch, she published her first book in 2012 and plans to publish countless more in the future. She lives in the beautiful foothills of North Carolina with her punk-rocker husband and their five crazy kitties. Writing takes up most of her time, aside from her day job in the retail industry. As a fan of contemporary, paranormal and historical novels alike, she can’t get enough of feisty heroines and alpha heroes. Her mind is a wonderland of romance and adventure, laughter and awesome ways of kicking a guy when he’s down. She probably wouldn’t be too sane without her computer and notebooks. After all, what’s a girl to do when there are people jabbering away in her head and it’s hard to shut them up? Write! Nothing else works. 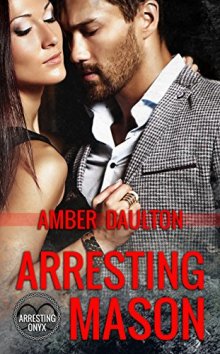