What a great topic – How fun to write about something so tasty! Thank you, Night Owl, for suggesting it.

But I feel like I should add one of those disclosure warnings before I go any further. Something like… Full Disclosure: I’m eating a milk chocolate Cadbury bar as I’m writing this blog. Irony found!

No doubt about it, chocolate is the BEST food in the world. Oh sure, Prometheus gave us fire, but the Aztecs gave us chocolate. In fact, the Latin word for the cacao tree is Theobroma Cacao, which means food of the gods.

And it must be true because I feel very goddess-like when I’m eating it.

So you can understand my dilemma when my six-week-old nursing baby developed a dairy intolerance and the cranky, old gastroenterologist who treated her told me I had to either put her on formula (his choice) or cut all dairy products from my diet (my choice).

Hence my search for a delicious dark chocolate began.

Picture this: My first stop on the way home from an eight-day hospital stay with my twin infants (my son was fine, but he stayed with me while my daughter was sick) was the drug store candy aisle to track down chocolate for me that didn’t contain dairy. Yes, I was a little desperate, and believe me, it was HARD to find as I was also told no soy, and it turns out soy is in almost everything! But it was also my introduction to some of the best dark chocolate in the world.

My go-to brand was (and still is) the Lindt Excellence dark chocolate as it was easy to find and so delectable. To get the soya lecithin-free version, I had to start at the 70% cocoa and go up from there, but once my daughter was older, and the added soy wasn’t an issue, I found some truly luscious dark chocolate that would win over even the most staunch milk chocolate enthusiast.

With that in mind, here are my top three dark chocolates in three different categories—and let me point out that cacao and cocoa are two different things. As I understand it, cacao is the raw, less processed version, while cocoa is processed longer and at a higher heat (and also a little sweeter!):

Most of the chocolate that is less than 70% cocoa has soya lecithin in it as an emulsifier, and a lot of it also has dairy products, so I couldn’t explore this world of creamy goodness until after my daughter was weaned. There are lots of great chocolates in this category, including the Lindt Excellence Mint dark chocolate bar, which is a close second. But ultimately, I am going to go with the Lindt Excellence Sea Salt dark chocolate bar. It has so much flavor, melts in your mouth, and that bite of sea salt just zings through your taste buds. As an added bonus, when I convinced my brother to try it, who is a milk chocolate devotee and swore he wouldn’t like ANY dark chocolate, he admitted this one was really good. Like, seriously good. Which meant I WAS RIGHT!!

This is an easy one. In my opinion, no other dark chocolate that is this dark can touch the perfectly sweet, warm, melt-in-your-mouth deliciousness of the Lindt Excellence Madagascar 70% Cacao chocolate bar. There are only four ingredients: cocoa mass (70%), cocoa butter, sugar, and vanilla. And as the name suggests, the cocoa comes from cacao beans grown in Madagascar. If you don’t trust my recommendation, how about that of a seven-year-old sugar fiend? Yup, my stash of dark Madagascar chocolate has been claimed by my daughter, who now calls it her special chocolate. So take it from a kid—this chocolate is super yummy!

The farther over 70% cocoa I go, the less chance I’ll like dark chocolate. But sometimes I’m trying to be super healthy (I’m shaking my fist at you, low-carb dieting!) and the recommendation is to go no lower than 80% cocoa. So, with that in mind, I have found one 80% cocoa bar that I thought was quite good—which means not too bitter, not too sweet, and a warm, smooth texture in my mouth. The winner in this category is Zazubean Nudie 80% Cacao Extra Dark Chocolate. What I find interesting about this chocolate, is it’s sweetened with coconut sugar which is also supposed to be a good alternative to regular sugar. Zazubean, my pancreas thanks you.

So there you have it. Some favorite dark chocolates for even the most die-hard milk chocolate fans! Please let me know if you have your own favorites for me to try.

Could she save him as well?

Laird Gavin MacKinnon is a changed man—and not for the better. Ever since his young son, Ewan, disappeared two years ago, Gavin has grown callous and bitter. Scouring the countryside, his search leads him to a mysterious woman who maintains the boy is hers. He decides to take them both and ask questions later.

Deirdre MacIntyre will go with the brooding laird if it will keep her son safe. Gavin has to admit that the beautiful lass has a bond with Ewan, and things aren't adding up. When Deirdre's clan comes to claim her under threat of war, Gavin has a choice to make: fight for her or let her go.

Alyson McLayne is a mom of twins and an award-winning writer of contemporary, historical and paranormal romance. She’s also a dog lover and cat servant with a serious stash of dark chocolate. After getting her degree in theater at the University of Alberta, she promptly moved to the West Coast of Canada where she worked in film for several years and met her prop master husband.

Alyson has been nominated for several Romance Writers of America contests, including The Golden Heart, The Golden Pen, The Orange Rose, Great Expectations, The Molly’s and The Winter Rose.

Her debut historical romance, Highland Promise, will be published by Sourcebooks on October 3, 2017. Highland Promise is the first of five books in The Sons of Gregor MacLeod series. Highland Bride will come out February 1, 2018.

Alyson and her family reside in Vancouver with their sweet but troublesome chocolate lab puppy named Jasper. 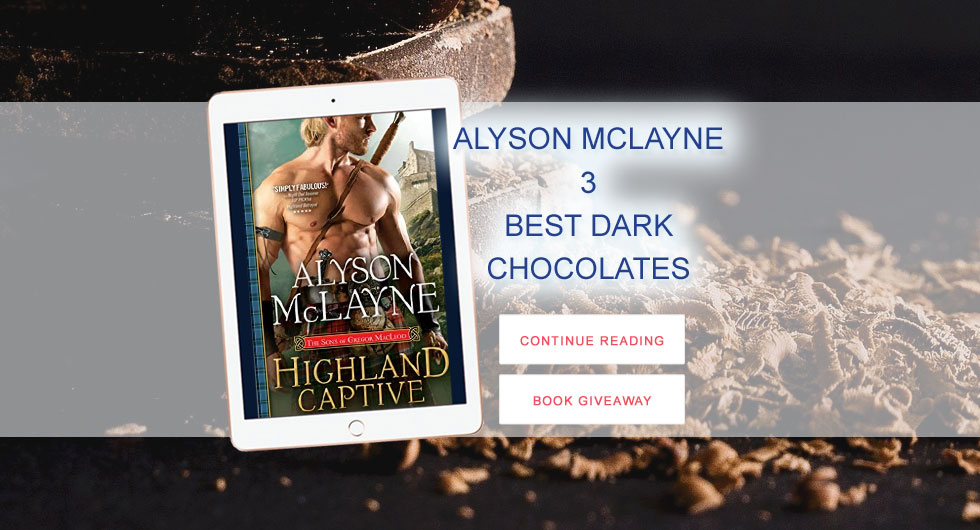