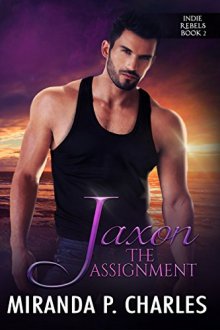 To save his long-lost brother from the clutches of a criminal syndicate, Jaxon has to endanger the life of the woman he is assigned to protect. But how can he betray the one person who wants to give him her whole heart?

Jaxon Caine refuses to respond to Holly Stirling’s flirtations no matter how attracted he is to the superstar singer. Dating her means being dragged into the limelight, and he can’t stomach the thought of subjecting Holly to the kind of scrutiny she’s bound to get if his family secrets are uncovered. But when his long-lost brother suddenly shows up as Holly’s bodyguard, Jaxon is thrown into Holly’s space. He is assigned by the Indie Rebels—a covert crime-fighting group—to investigate his brother. But this assignment means endangering Holly. Can he forgive himself if anything happens to her?

Holly Stirling is one of the most fortunate women on the planet with her successful career and legions of fans. But when it comes to love, her heart keeps getting broken. It’s no different with Jaxon Caine, who continues to reject her. To her surprise, though, Jaxon seems jealous of her new bodyguard. Could it be he’s interested after all?

As Holly and Jaxon become closer, the threat against her grows, forcing Jaxon to choose between his duty and his heart.

Holly donned her disguise before walking out the side entrance of the studio, where Bryce was waiting for her.

“Thank you,” Holly said as Bryce opened the car door. She slid in the back, unable to keep the smile from her face. She was so looking forward to Jaxon’s surprise.

Bryce got behind the wheel.

“Can you take me to A to X Fitness, please, Bryce?”

Bryce glanced back at her in surprise. “Right now?”

“Yes. Then you can have the rest of the day off. I’m having dinner with Xavier and Eve, and they’re driving me back to Avalon.”

“Are you sure? I can pick you up from wherever. Saves them from driving you.”

Bryce turned on the engine and started driving. “Uh, Holly…”

“I’m wondering if you’re happy with my performance?”

“It’s just that you don’t seem to need me much. I hope it’s not because you don’t like me being your bodyguard.”

Holly chuckled. “It’s not that. My family’s just very careful with my security, with the kidnapping threat and all. If they can play bodyguard to me twenty-four/seven, they will. It’s not about you and your performance.”

Bryce smiled at her through the rearview mirror. “That’s a relief. When I first heard about Anna’s disappearance, I’d expected I’d hardly have any time off. It turns out I’m practically working part-time while I’m getting paid full-time. I guess I’m a bit worried.”

“Don’t be. You are on call all the time, so effectively, you are working full-time. I’m not even thinking of cutting down your hours.”

“Thank you. So will you be staying at Jaxon’s indefinitely? I was just wondering what will happen if the police never catch the kidnappers.”

“You know, I’ve been wondering about that too. I don’t know the answer to that. I’m taking a wait and see attitude for now.”

“You must be missing your own home.”

Holly let out a laugh. In truth, she wasn’t. She was exactly where she wanted to be—with Jaxon. “Yeah, a bit, although I can’t imagine going back there and wondering if someone would try and break in while I’m fast asleep.”

“Isn’t your security there better than Jaxon’s place? You told me you have cameras all around the perimeter.”

“Yes. It’s really more for my OZs that I decided not to stay there. If they don’t know where I am, they can’t get themselves in any more trouble. Thankfully, so far, this whole setup is working.”

“Yeah,” Bryce said, chuckling. “I just read an article earlier this morning where they’re saying you might have been kidnapped already since no one’s seen you around in days.”

She shook her head. “Yeah, I read that too. Christine’s already arranging for an interview so I can prove I’m safe and sound.”

“I hate to say this, but it’ll only be a matter of time before they find out where you are. As careful as we try to be, someone’s bound to look closely enough and recognise you in disguise.”

“I know,” she said despondently. “I’m not sure what we can do about that.”

MORE IN THE SERIES: All stand alone

Miranda P. Charles is the author of more than eighteen steamy and stirring contemporary romance novels.

She prefers to spend her time in front of her laptop, putting into words the love stories that play in her head. Don't get her started with reading a great book, though, because she has the tendency to not put it down until she gets to the last page.

She does have a life outside of books. Mostly, that consists of bonding with family and friends or going on romantic trips with her awesome husband (who, thankfully, puts up with her hermit-like daily routine). Oh, yeah, there's also the housework. But she really wishes someone else could do that for her so she could get back to her books!

She lives in the beautiful city of Sydney, Australia.