One of my favorite aspects about starting a new book is the research. However, I’m not talking poring through books upon books revolving around the subjects. I’m a kinesthetic sort of learner, so the best way for information to stick is to experience it myself. So, the moment I decided I was going to write shifters, wolf shifters in particular, one thing became abundantly clear: I needed to see a wolf up close and personal.

Luckily for me, I live in Southeastern Pennsylvania, about one hour away from a wolf sanctuary. Once a month they do a full moon tour, so I checked it out late at night in the middle of the summer. The adventure couldn’t have been more perfect. Not only did the tour guides give ample information about the wolves, but with how close you could get, it became that much easier to visualize the different types, the coats, and watch how they all interacted as a pack.

In visiting places like that and watching them roam, I gained a clearer understanding of how the wolf moves and how they work, which I then funneled into my story. Forged Alliances, book one in my Tribal Spirits shifter series, benefited from all of that sensory experience, as I was able to translate my own personal views of the sanctuary and packs we got to watch roam around into the ones that operated in my book. They always say to write from experience, and I’ve found that in at least integrating a piece of something I know or can visit usually leads to a richer reading experience.

If you have the opportunity to visit a wolf sanctuary? Do so. If not, you can always read about them in Forged Alliances!

Sierra Kanoska fought hard for her position as wolf alpha of the Red Rock pack, and intruders in her territory receive the full brunt of what her claws, fangs, and smarts can accomplish. So when Dax Williams, de facto alpha of the Silver Springs pack, pays an unwelcome visit, Sierra's ready to toss him out. However, the man's in a tough spot. The pack elders sabotaged his fight for alpha against his brother, driving him from his lands. Sierra hates underhanded moves like that, so she agrees on an alliance.

As they work together, she witnesses an alpha who wants to do right by his pack, not just the cocky wiseass she first met. Their growing attraction blazes hot, but the moment she and Dax lock lips, a mating bond emerges. Sierra sure as hell isn't ready to share that intimate connection with a stranger, and the thought of forever sends Dax running.

Before they can talk, the Tribe commanding the East Coast shifters arrives to settle the dispute. Dax and his brother's punishment for their pack's civil war is a free-for-all on their lands. Not only does he have to defeat his brother, but any challenger in the region. Despite Dax and Sierra's initial resistance, his wily charm relaxes her control-freak tendencies while her steadfast support bolsters his strength. Yet every new opponent places their newfound relationship under siege--one misstep, one wrong blow in the ring, and Dax could leave in a bodybag.

Katherine McIntyre is a feisty Irish chick with a big attitude despite her short stature. She writes stories featuring snarky women, ragtag crews, and men with bad attitudes—high chance for a passionate speech thrown into the mix. As an eternal geek and tomboy who’s always stepped to her own beat, she’s made it her mission to write stories that represent the broad spectrum of people out there, from different cultures and races to all varieties of men and women. Easily distracted by cats and sugar. 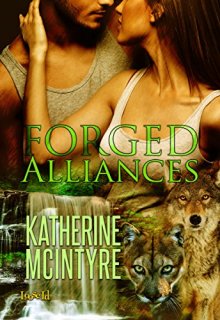