Who Were the Pathfinders? by Anna Schmidt, Author of Pathfinder

Today we have Anna Schmidt joining us to share some history on the Pathfinders.

So who were the Pathfinders?

In general they were (and are) the leaders, the trailblazers, the pioneers that move society forward. In this story they are Max and Emma, finding their way into a New World when the world they have known disappears.

Why do they become pathfinders?

To preserve what they can of the lives they have come to love—the careers they know and love.

The West changed with the advent of fencing, the railroad and tourism. The coming of the 20th Century promised more changes to come—especially in the West.

Return to a time

when the West was Wild...

Captain Max Winslow was once a pathfinder for the Army, blazing trails and keeping his brothers-in-arms safe. Now he's the star of a Wild West show, reminding curious audiences of days long gone. The world around him may be changing, but that doesn't mean he has to accept it—not when there are frontiers yet to be explored.

When Max first sets eyes on no-nonsense Harvey Girl Emma Elliot, he knows that anything between them would be impossible. She's a realist embracing what the future holds, while he's a dreamer, determined to preserve the West he once knew. And yet something about Emma's strength of will calls to him. It isn't long before Max must decide: is there room in his dream for love, or will his resolve to hang on to the past jeopardize their future?

Having practically counted the ticks of the large clock in the lobby, marking time until the supper shift ended, Emma changed out of her uniform, released her hair from the bonds of its chignon, and fastened it with a barrette at the nape of her neck. George had mentioned a surprise, but she wasn’t sure what she should do. Wait in her room? Wait outside the kitchen door where he had come before? Of course, the surprise might be tomorrow or next week for all she knew.

In the end, she settled on a compromise. She would sit in one of the rocking chairs on the hotel veranda. It was not at all unusual for her to do that before retiring for the night. No one would think it odd. Yes, that was the right choice. She carried along a basket of knitting. She could form stitches even in the dark if necessary, although there was always light coming from the lobby windows.

Knit one, purl one, repeat.

As she worked, she kept an eye out for Diablo. The stallion would be the clearest sign of Max’s arrival. As the minutes clicked away, she counted out the pattern, nodding politely to guests returning to the hotel for the night while she waited. She was about to pack up her yarn and needles when from behind her, she heard the unmistakable sound of dishes rattling on a metal tray.

She turned and saw Max struggling to keep two glass ice cream dishes plus spoons and napkins at an even keel.

“This is harder than it looks,” he grumbled.

Emma set her knitting aside and relieved him of the tray. “What on earth?”

“I promised you ice cream.”

“That you did,” she said, setting the tray on a small side table.

“I can’t take full credit. I had help. George is responsible for the whipped cream and the cherries. He insisted. Truth is, he was so set on getting it all perfect, I figured you’d be long gone by the time I got here.”

“How did you know where to find me?”

Max chuckled. “Folks tend to keep an eye on you, Emmie. One of the waitresses came through the kitchen while George was fussing with the sundaes, and I reckon she just assumed this was all for you. She reminded George vanilla is your favorite and then told me you were out here.” He handed her a cloth napkin and spoon, waited for her to drape the napkin over her lap, and then presented the stemmed glass bowl brimming with the sundae.

“Thank you. It looks delicious.”

“It’s not for admiring, Emmie. Take a bite before the whole thing melts.” As if to demonstrate, he filled his spoon with a heaping bite of his chocolate ice cream and savored it. “Mm-mm.”

Emma took a much smaller bite and relished the cold sweetness that filled her mouth. “Oh, that’s so good,” she murmured and quickly took another bite.

“If you think that’s good, try this,” he said, offering her a bite of his.

The gesture seemed far too intimate to be proper, and yet it was hard to resist his enthusiasm. She opened her mouth, and he slid the spoon between her parted lips. The chocolate was rich, almost decadent. She closed her eyes. Slowly, Max withdrew the spoon. When she opened her eyes, he was watching her, the spoon still suspended between them.

“Do you really prefer vanilla?” he asked, his voice husky.

“I prefer variety,” she replied and, to prove her point, took a bite of her ice cream.

This was getting out of hand. She was not immune to the game he was playing, but really, they were seated in a public place where they might easily be observed by anyone. Instead of filling her spoon and feeding him, she handed him her dish. “Help yourself.”

He set his dish on the tray and accepted hers, filling his spoon not once but twice before she objected.

“I didn’t say take it all,” she protested with a laugh. When she reached for her dish, he turned away, protecting it. “Very well,” she announced. “Two can play this game.” She picked up his dessert. Caught up in the silliness of their contest, she ate three small bites of his chocolate sundae in quick succession, then closed her eyes as the cold went straight to her head, giving her a sudden headache.

Max set the dish he was holding aside and took hers from her, then clasped her hand. “Are you okay?”

She nodded and smiled as she shook off the headache. “One forgets ice cream is to be savored, not gobbled like a last meal.” She leaned back in her chair as did he. She noticed he did not let go of her hand. They set the rockers in motion.

After a moment, he said, “You gonna eat that last cherry?”

She laughed. “It’s all yours.” She watched him pop the fruit in his mouth. “How did the first show go?”

“I think we were a hit, as they say in this business. Folks were definitely on their feet cheering.”

“Someone mentioned they could hear the roar of the crowd all the way in town.”

Max chuckled. “I kind of doubt that, but it’s nice to think about. You should have seen Reba in that blouse you fixed up for her.”

“I just think Pearl should have the credit.”

She heard him let out a long breath. He sounded exhausted, and it occurred to her that if she thought her day had been long and hard, his had begun well before dawn and included not just the parade and the show but also the emergency of Reba’s costume. And that was just what she knew. Yet he’d made time to come to meet her.

She stood and set the dishes and her napkin on the tray. “Thank you, Max, for this lovely treat.”

She couldn’t help laughing. “Tomorrow is another day. I have four trainloads of people to serve, and you have two performances to deliver. I think we could both use some rest.”

“Are we still going to meet your friends a week from Sunday?”

“Are you sure you have time?”

“Show’s up and running, and we don’t perform on Sundays, so the answer is I’m looking forward to it.”

“I’ll rent a buggy if that suits.”

“That would be fine.” The playfulness they’d shared while eating their ice cream had disappeared. Emma wondered if there would ever come a time when they could be completely at ease in each other’s company.

Max took a step toward the back of the hotel.

“There’s no need to see me to the door,” Emma protested.

The lamplight from the lobby caught Max’s smile. “Now what kind of gentleman allows a lady to walk home alone?”

“It’s no more than a few steps,” she reminded him.

“You’d be surprised what can happen in just a few steps,” he replied.

They walked along the path that led around the side of the hotel and on to the kitchen entrance. Emma balanced the tray with their dishes while Max reached for the door.

“Well, here I am, safe and sound,” she said, wishing there were more time. “Good night. Thank you for the ice cream.”

She looked back at him with a questioning smile. Gently, he relieved her of the tray, setting it just inside the door, then took hold of her shoulders and turned her so their faces were only inches apart. He was wearing his hat, and his face was in shadow, and yet she knew what he wanted—what she wanted.

As if driven by outside forces, she placed her hand on the back of his neck and raised herself to her toes. “Yes,” she whispered, although he had not asked, at least not in words.

She felt the warmth of his breath and then the fullness of his lips meeting hers. She felt as if she could stand in that place all night.

MORE IN THE SERIES

Award-winning author ANNA SCHMIDT delights in creating stories where her characters must wrestle with the challenges of their times. Critics have consistently praised Schmidt for the reality of her characters—exposing their flaws as well as their strengths as she delivers strong tales of hope and love in the face of seemingly insurmountable obstacles. She resides in Wisconsin and Florida. 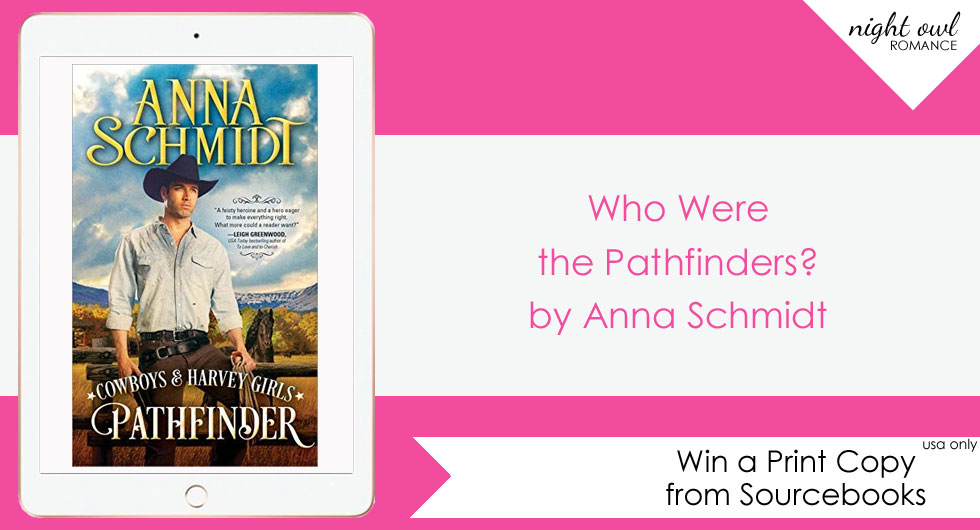