Today we have a sweet puppy novel excerpt for y’all. So get ready for love, puppies and smiles.

These adorable service puppies
are matchmakers in the making...

Dawn Vasquez never takes life too seriously. But when she rescues a golden retriever named Gigi, Dawn begins to imagine what it'd be like to settle down and let someone rely on her for a change. Unfortunately, Adam Dearborn—a handsome, hopelessly buttoned-up cattle rancher in need of a guide dog—has also fallen in love with the little ball of fluff and stubbornly insists that no other animal will do.

Adam isn't sure what drives him to fight to keep Gigi for himself, but he suspects it has something to do with his growing—and unfortunate—attachment to Dawn. Her whirlwind spirit and sunny disposition might make her a delight to be around, but they also make her unsuited for the difficult life of a rancher. He should be able to put her out of his head. But what's a love-struck cowboy to do when what he wants and what he needs have never seemed so far apart? And can he allow himself to take a chance on everything Dawn has to offer: puppy kisses, puppy love...and her.

“She’s a sweet little thing, isn’t she?” Marcia’s soft, clipped voice was followed by the snap of her medical bag being closed. She’d come out to the ranch as soon as they’d called, her examination swift but sure. “Every time I press somewhere it hurts, she just licks me to try to get me to stop. It’s breaking my heart.”

“But she’ll be okay, right?” Dawn asked anxiously. “She doesn’t need surgery or anything? Just a little extra love and care, and she’ll be as good as new?”

Adam was more grateful than he could say that Dawn put into words the exact thing he was feeling. He didn’t want to speak for fear that it would dislodge the puppy. The entire exam had taken place on his lap because Methuselah wouldn’t leave it. Five seconds away from any of the people currently in this living room, and she started shaking and whimpering as though it caused her physical pain.

Adam could relate. It was hard to give up a warm lap once it had finally been offered.

“Love, antibiotics, a strict feeding schedule, and a few weeks of good Dearborn Ranch air, and she’ll be back on her feet.” Adam could practically hear the smile in Marcia’s voice. She always had a smile in her voice. He couldn’t count the number of times he’d had to call her in the middle of the night to tend to a sick cow, but she rarely lost one. That was probably what made her so cheerful.

Well, either that or the fact that she was a happily married mother of three with the respect and admiration of just about everyone who knew her. It was a toss-up.

“She’s lucky you found her when you did, though,” Marcia said. “She wouldn’t have lasted much more than a day or two like this. Where did you say you came across her?”

“Strange. It’s not often you find a puppy like this one abandoned on the side of the road.” There were a few more rustling sounds as Marcia packed up her gear and prepared to head out. It was growing late, and Adam was sure she had several more house calls to make before her day was through. Life out here wasn’t easy on any of them. “If she’s purebred—and from the looks of it, she is—that’s over a thousand bucks someone left behind. She may have been lost. Do you want me to put out some feelers to find her owners?”

“No!” Both Adam and Dawn spoke at the same time and with the same passionate reaction. The volume caused Methuselah to give a nervous jump, but Adam put his hand on top of her head to calm her. She seemed to like that—burrowing somewhere warm, contentedly assuming that

Adam was there to provide protection.

In a more moderate tone so as not to cause the puppy to jump again, he added, “You said yourself that these sores have been developing for quite some time. I’m not so sure that whoever lost her deserves her back.”

“Suit yourself,” Marcia said, still cheery. “If it were my puppy who’d gone missing, I’d be frantic to find some news of her. You would, too, Adam, even though you’re much better than I am at maintaining emotional distance.”

He couldn’t disagree with that. Harboring sentimental feelings toward ranch animals was a hazardous approach to life in a place like this. You couldn’t go around getting attached to every cow who lowed her way into your heart, or there wouldn’t be anything left of it by the end of the first season. You could respect the animals. You could appreciate the animals. But there was no falling in love.

That was the first—and only—rule.

“I’ll be by again in the morning to check on her progress, but don’t hesitate to give me a call if you have any concerns,” Marcia said. “Dawn, it was lovely to meet you.”

Adam would have protested that—Dawn acting like the lady of the manor, escorting a veterinarian who’d been running around this place since she was a kid—but there was no way he could get up without moving Methuselah.

He realized his mistake the moment Dawn returned to the living room. The hot, heaving body on his lap had him pinned to the couch, unable to flee in any direction. Zeke had long since left to go for a run, and Phoebe never seemed to be around when he needed her.

In other words, he was trapped.

“Sheriff Jenkins wasn’t kidding about Marcia, was he?” Dawn asked, perfectly casual. “I can tell why she’s considered the best in twelve counties.”

Adam ignored her. Maybe if he refused to rise to her bait, she’d take the hint and leave.

Nice try, Adam. When has that ever worked before?

As if to prove it, Dawn’s weight sagged on the arm of the couch next to him. Her hand brushed his as she reached down to scratch the puppy behind the ear.

“I can also tell that you’d like nothing more than for me to take myself off and leave you alone,” she said. Coming from any other woman, those words might be intended to make him feel guilty.

Coming from this woman, they were almost certainly a declaration of war. “But I’m feeling awfully exhausted from my long day of puppy rescue. Mind if I curl up next to you and take a nap?”

“Don’t you have a house of your own?”

“Yes, but it’s sad and empty and I don’t want to go back to it alone.”

“Then why are you laughing?”

“Because you two look so adorable, all snuggled up together and trying to get rid of me.” Dawn paused, the laughter still in her voice. “She’s the same color as your pants, by the way. A kind of warm, beigy tan with dark-golden ears. She’ll eventually grow into those neck wrinkles, but right now she looks like she needs to be ironed.”

Adam grunted a noncommittal reply. He’d never admit it to this woman, but the easy way she described the puppy to him was both helpful and thoughtful. A lot of people made a huge production out of painting the world around him, sounding more like art students let loose in a museum for the first time than actual human beings. The play of the light over the leaves… The sun-dappled mountains rising in the distance… Poetry was all well and good for some people, but all Adam needed were the basic facts, thanks.

There’s a tree five feet to your right.

The dog is tan.

This giveaway is now over. The lucky print book winner is: Wendy Wong

About the Author: Lucy Gilmore is a contemporary romance author with a love of puppies, rainbows, and happily ever afters. She began her reading (and writing) career as an English literature major and ended as a die-hard fan of romance in all forms. When she’s not rolling around with her two Akitas, she can be found hiking, biking, or with her nose buried in a book. Visit her online at http://lucygilmore.com. She lives in the Spokane, WA area. Author Website: http://lucygilmore.com. 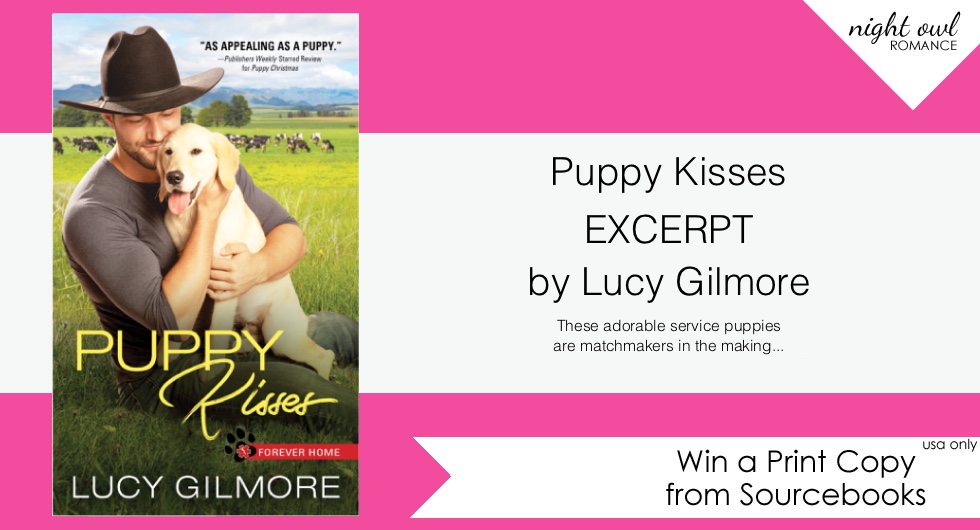