Today we have a sexy historical by Eliza Knight to share with you. Down below tryout the exclusive excerpt and also enter to win a copy. USA only for this giveaway and you need to be at least 18 to enter.

Toran Fraser encounters a mysterious rebel, and he can’t resist being recruited to her cause…

Toran Fraser is hell-bent on taking down the Jacobites. On a late-night mission, he’s intercepted by a woman known only as “Mistress J,” who’s determined to put Prince Charlie back on the throne of Scotland. Toran can’t resist her appeal—especially with her pistol pointed at his heart—and suddenly finds himself joining the rebellion…

By day, highborn Jenny Mackintosh runs her estate in the Highlands. By night, she’s one of Prince Charlie’s Angels—a band of Jacobite rebels. Scoffing at mortal danger, she raises coin, delivers weapons, and recruits soldiers for the rebellion. When she encounters a handsome Highlander who is clearly on the run, she is more than a little intrigued. She isn’t expecting to be his enemy…

A loud knock silenced her mother, and every head in the great hall swiveled in the direction of the archway that led to the front doors.

Her brother’s men must have come early.

“Show them in,” Jenny ordered the guards who stood sentry. They nodded, leaving the great hall along with her appetite.

Jenny set down her spoon and smiled tightly at her mother. “Hamish’s men will be on their way shortly, Mama. Go ahead and finish your meal.”

Jenny stood from the table, prepared to meet the men in the entry hall and offer them sustenance before showing them their wagons. Ideally they’d be willing to turn and leave right away, but they’d likely prefer at least a night of rest. But as she drew closer to the archway, the voices she heard did not sound like those of men, but rather…a lass. A lad. And…nay. It couldn’t be!

Jenny quickened her pace, concern and fear ripping into her chest. Her footsteps drew to a halt in the dimly lit entryway when she saw exactly who’d come through her door with Mac at his side. Toran MacGillivray Fraser.

Standing behind him was another stranger flanked by two adolescents. But she had no interest in those. Staring at Toran, she felt like she’d been punched in the gut. The last time they’d spoken, they’d been threatening to kill each other, and then he’d disappeared.

A day’s worth of growth peppered his cheeks, giving him that rough look she found both intimidating and intriguing. The corner of his mouth twitched as though he wanted to smile but couldn’t allow himself to do so. And his eyes…oh, the danger in those eyes as they swept over her. His look sent unwanted chills of excitement racing over her skin. This was wrong. Very wrong.

Jenny allowed herself half a moment more to study him before shifting her gaze to the individuals he’d brought inside her keep and Mac.

At Toran’s side were a lad who appeared to be his spitting image and a lass who looked very familiar but whom she was certain she’d never met.

Her gaze was drawn back to Toran’s. Blast it all, but his damned blue eyes made her melt and rallied her ire at the same time.

“Mac, what is he doing here?” The harsh words snapped out of Jenny’s mouth despite the fact that she was actually pleased to see he was still alive, if only because she wanted to be the one to kill him.

After her conversation with Dirk, the memory of those ice-blue eyes and the fear that he’d come back and bring with him a horde of dragoons had stolen away her sleep the past few nights.

Seeing him now, her palms slickened enough she wanted to slap herself into sanity.

“Ye’re in the Mackintosh castle,” Toran interrupted Mac’s explanation with a cock of his head, but before she could retort and admonish her guard for having brought the enemy into their midst, he continued, “’Tis good to see ye too…my lady.” The last bit was drawled in his scratchy brogue, as though he weren’t certain how to address her.

Och, but why did he have to do that? She was grateful for his caution and irritated all the same.

“What are ye doing here, Fraser?” she asked again. “And who are the ragamuffins ye’ve brought with ye?”

The lass pouted in turn, and the lad puffed his chest. His frown mirrored Toran’s, causing Jenny a flicker of guilt. The man beside them all who looked a wee bit out of place scowled at her. She instantly didn’t like him. He struck her as one of those fellows who saw himself worlds higher than anyone else.

“Did ye think I’d deserted ye, the cause?”

She narrowed her gaze. “I believe verra much ye would and that ye did.”

His jaw tightened. She crossed her arms protectively over her chest. He was going to have to do a whole hell of a lot better than that.

“This is my brother Camdyn and my sister Isla.” He nodded toward the man. “My cousin Simon.”

She studied the two young ones again, seeing now what she’d idly noted before and making sense of it. Though their clothes were dusty from travel, the fabric was of high quality. Camdyn wore trews and a frock coat and Isla a simple arisaid. Their leather shoes appeared sturdy and well made. Simon also wore clothes of good quality, but it was evident he didn’t care so much for his appearance, somehow coming off as bedraggled in his expensive boots.

Toran’s gaze roved over her, his brow rising, and she realized then she was dressed in a proper gown. He’d yet to see her in anything other than her trews and jacket. This was not her favorite gown, but she knew it flattered her figure. Made of soft green dyed wool, the whale-boned bodice accentuated her curves and pushed her breasts up, the fleshy parts thankfully hidden by a soft woven shawl made by a Mackintosh weaver.

When he didn’t say anything further, Jenny dismissed the two men hovering protectively behind her. To Mac, she narrowed her gaze. “Go and get Dirk.”


With her guards out of sight, Toran’s shoulders seemed to ease some. “As I said, I’d not desert ye, Mistress.” He whispered the title.

This giveaway is now over. The lucky print book winner is: Sharon Extine 5910 Georgedale

Comment Question: What’s your favorite colors for Plaid? Do you have favorite pattern? Family pattern? 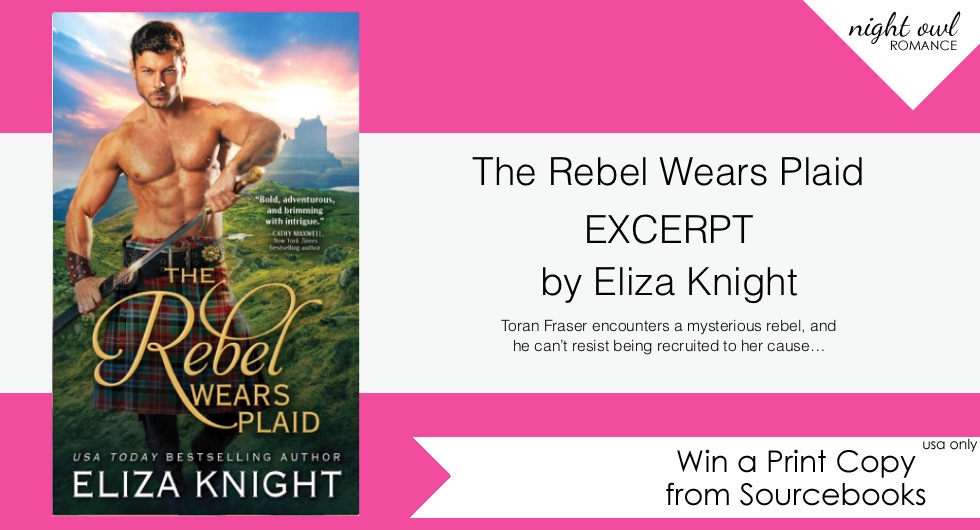