Spain can be all that and more. I’ve been living in Madrid, Spain, for quite a few years and it’s a great place to be.

As the capital of Spain, Madrid’s offer when it comes to culture, entertainment, nightlife, etc., is practically endless, so I’ve spoken with two of my characters who live in the city, Alejandro from Spanish Diversion and Eva from Max’s Desire, to help me choose some of the things you must do if you ever come visit.

Sunshine: Madrid is a great city for walking. You can easily go from one place to another and discover great things. For instance, currently, there are giant Menina sculptures spread throughout the city. Last year, there were Wonder Women statues and a few months ago, Harry Potter and Star Wars were all over the city. You never know what you’re going to find!

But, there’s more. When walking through the city, one must also look up. The buildings, many of them with years of history, are works of art within themselves and you can always discover something.

Tired of walking? You can either take the subway or stop for a drink.

Sangria: There are about 1.83 bars per every thousand inhabitants in Madrid. If you’re thirsty, you’re sure to find a place to stop for a drink. Now, although Sangria has become a world renowned drink, both Eva and Alejandro recommend trying something a bit more madrileño.

“If you drink beer in Madrid, you’re going to get Mahou,” says Alejandro, referring to the popular brand.

“It’s not worth it,” Eva interrupts. “Go for a tinto de verano. It’s refreshing and good at any time of day.”

I have to agree with Eva. Tinto de verano is a mix of wine and soda (usually of the Casera brand). When you’ve been out in the heat all day, it goes in well. You can buy it premade in supermarkets or make it at home. Do you want to try? Just mix about 50% red wine and about 50% lemon soda, add an orange or lemon slice and lots of ice. Buen provecho!

Enjoying a tinto de verano from a rooftop terrace.

Romance: “Perhaps Madrid isn’t the most romantic city in the world,” Eva says. “But there’s something special about it, magical, mysterious.”

“So, where would you take your significant other?” I ask them.

“Within the city limits I’d recommend Retiro Park,” says Alejandro. “The green area is right in the city center and it’s the perfect place for a romantic stroll or a boat trip across its lake while the sun sets.”

“Templo de Debod is also nice for that,” Eva adds. “It’s an Egyptian temple in another park from which you can see the city.”

“You can find love anywhere, really,” Alejandro says. “Or fall in love with Madrid.”

Currently, I have two books which take place in Madrid. One is my male/male romance, Spanish Diversion, and the other is my upcoming M/F paranormal release, Max’s Desire, (Alpha Protectors 3).

He’s the kind of man her mother warned her to steer clear from...

Mystique is happy with her current life, but for years she's struggled on a path of self-destruction. She knows she shouldn't get involved with the brooding hunk at the bar, but how can she stay away when his sorrowful gaze is so compelling?

Reine has lost everything: his wife, his friends, his ability to fight, and his identity as an Alpha Protector. There's nothing left for him except a world of anger and bitterness. At least, that’s what he believes until he meets an intrepid waitress.

The attraction between them is immediate, but while Reine can’t let go of his past, Mystique is not willing to return to hers. With darkness constantly closing in, will they find a way to be together? Or, will Reine's behavior destroy their future?

Kaila is His. His Mate. Forever.

When Seamus discovers Kaila is in danger he sets out to save her. He couldn’t care less that she doesn’t want him there. His objective in life is to love and protect her. Besides, she might refuse to be with him, but her body knows better. With both their lives on the line, she can’t say no to his aid, can she?

For years, she has ignored her feelings.

Kaila’s mission was supposed to be easy: enter the demon’s lair and save her sister. Then, he came along. For close to twenty years she has been fighting against the mating pull. She has avoided Seamus at all costs, but now they’re both trapped in hell and she has nowhere to run, except, maybe, into his arms.

How can a man love a succubus without literally losing his heart?

Alpha Protector Max almost died during his last mission to Lust’s hellish lair, but the worst torture was his failure to save Eva, a young woman who begged for his help. When he meets her again in Spain, he discovers two things. One, she is his mate. Two, she is also a succubus.

Though Eva has not come into her full power, her love could still be fatal. For how long will he be able to defy her allure?

Although unaware of her true nature, as a luxury escort, she is used to men falling at her feet. Yet, Max doesn't. Though his attraction mirrors hers, the soldier does things differently and she can't help falling for him.

And Eva is terrified by her recurring nightmares. When someone from her past shows up, and the dreams become reality, there is only one thing that can save Max’s heart.

Elyzabeth M. VaLey is a writer of sizzling, sexy romance who firmly believes in happy ever after.  From paranormal to contemporary, fantasy, or historical, she enjoys exploring her characters' darker side and writing stories about tortured heroes, strong heroines, and all that comes between them and their love.

When she's not writing, she can be found walking in the Spanish countryside with her black Lab, exploring castles, or enjoying some tapas with her friends. 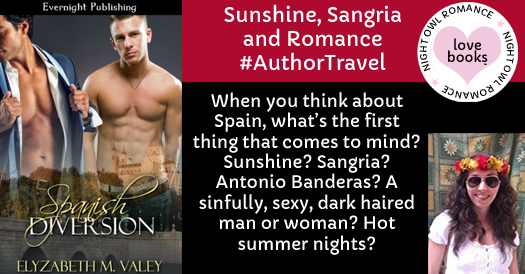