About The Sometimes Sisters by Carolyn Brown

Good mornin’ to all y’all at Night Owl Romance, and thank you for the awesome review on The Sometimes Sisters. I’m so glad that y’all liked the story of the three sisters’ journey from being sometimes sisters to forever sisters.

This book is about three sisters. Harper and Tawny are full blood sisters as we say in the south, born to the same father and mother. Dana shares a father with them but has a different mother. I can relate to all of them, but maybe Dana a little more in some instances. My father had more than one family. I was the oldest child of that first family, rejected and left behind for his future wives and their children, so she and I had a lot in common. However, I had a full blood sister so I could also relate to Tawny and Harper.

That being said, my sister, Patti, and I were best friends. She passed away suddenly four years ago but she was a blessing and her memories still bring me so much joy. I’ll share a story with you:

Patti and I would have never walked the red carpet in a fashion show. We were both vertically challenged and horizontally blessed. As Ma used to say on Golden Girls: “Picture this, Davis, Oklahoma, 1985.” –Patti and I decided that those skinny broads living inside us were going to be let loose. We were going to be thin, come hell or high water, so she bought an exercise tape and we pinky swore we’d do it every night until we wore jeans in single digits.

Now, my sister was one of those women who took the trash out in full makeup, high heeled shoes and not a single chip in her fingernail polish. So there was no way she was going to exercise without the right clothing. So she bought herself a cute little leotard with yellow and black horizontal stripes. I took the trash out in a robe pinned together because I’d lost the last button so I showed up in well-worn gray sweats. And we started the tape. She looked like a bumble bee and I resembled an old football coach ready for retirement.

Five minutes in, sweat was pouring, but by golly, we had gotten through the warm up session. Fifteen minutes later, I was stretched out on the floor with the phone in my hand ready to call the ambulance. Twenty minutes later the bumble bee was panting beside me. We turned off that evil tape and when we had enough energy we brought out a half gallon of rocky road ice cream and two spoons (that’s where I got the idea for a scene in The Sometimes Sisters—they’d been arguing, not exercising though) and decided that being skinny wasn’t all it was cracked up to be.

Sisters are a blessing for sure, just like Harper, Tawny and Dana learn in The Sometimes Sisters. It might take a while for them to get to the end of the journey and become forever sisters, but with Zed’s help, maybe they’ll make it.

Thank you for letting me share my priceless memory, and I hope you enjoy this story of sisters who find their way back to family.

The Blessing of Having Sisters

When they were growing up, Dana, Harper, and Tawny thought of themselves as “sometimes sisters.” They connected only during the summer month they’d all spend at their grandmother’s rustic lakeside resort in north Texas. But secrets started building, and ten years have passed since they’ve all been together—in fact, they’ve rarely spoken, and it broke their grandmother’s heart.

Now she’s gone, leaving Annie’s Place to her granddaughters—twelve cabins, a small house, a café, a convenience store, and a lot of family memories. It’s where Dana, Harper, and Tawny once shared so many good times. They’ve returned, sharing only hidden regrets, a guarded mistrust, and haunting guilt. But now, in this healing summer place, the secrets that once drove them apart could bring them back together—especially when they discover that their grandmother may have been hiding something, too…

To overcome the past and find future happiness, these “sometimes sisters” have one more chance to realize they are always family.

Carolyn Brown is a New York Times and USA Today bestselling author, as well as a RITA finalist. She has written several beloved and popular romance titles, ranging from historical to contemporary to cowboy-themed. She and her husband live in Davis, Oklahoma. They have three grown children, and enough grandchildren to keep them young. 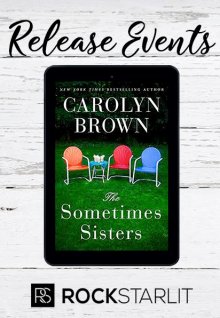