Once, he had to leave her behind…

Will she now trust him with her life?

The woman he just rescued is the one “Buck” Graham Buckner lost when he had to pull a vanishing act. Now the navy SEAL has to get Angela Vega out of Africa before the warlord he came to the continent to find kills them both. But the beautiful physician has children in her care, so they embark on a treacherous journey to protect them. Now Buck has a new mission—rekindling the love he never forgot.

He was the same Graham she’s known and loved in medical school, yet different.

His body was honed, his muscles tight and strong and his eyes… Those gorgeous blue eyes she’d fallen into on their first group project were somehow different. Although still the same blue, they appeared to see more and have more depth than before. The lines around the corners of his eyes added character and the scar on his chin made her want to reach out and touch it.

As quickly as the thought sprang into her mind, she pushed it away and returned her attention to the road in front of the van.

Ahead, on the left, was a field of long grass with a patch of dirt next to the road. Rusted metal lay in a heap in the middle of the dirt.

“There!” Angela pointed to the dirt road past the tank track. “Turn there.”

Diesel only slowed enough to negotiate the turn and then sped along the bumpy road, barely more than a rutted track.

Big Jake’s brow crinkled as he glanced her way. “Are you sure this is the way?”

“Positive.” She nodded toward a blue, tin shack. “I remember that blue building.”

“And the one with the orange roof,” Brenda added, pointing to the structure.

“The village is another mile or more along this road and it’s tucked into the side of a hill.”

“As long as the dust settles before the rebel attackers get to where we turned off, they won’t have a clue we came this way.”

“If the dust settles,” T-Mac said.

Angela glanced back at the cloud of dust rising up behind them.

Elle James spent twenty years livin' and lovin' in South Texas, ranching horses, cattle, goats, ostriches and emus. A former IT professional, Elle is proud to be writing full-time, penning romantic suspense and paranormal adventures that keep her readers on the edge of their seats. Now living in northwest Arkansas, she isn't wrangling cattle, she's wrangling her muses, a malti-poo and yorkie. When she's not at her computer, she's out snow-skiing, boating, or riding her ATV, dreaming up new adventures in stories. 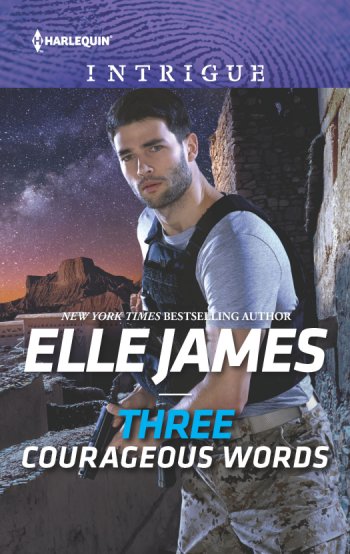